Watchmasters & Co
Lorton, VA 22079
Call or text for more info or to order.

War of the Worlds

Watchmasters always seems to be involved in some unusual watch adventure out there in the world. Many of our Rolex folks ask to hear and seem to enjoy hearing the tale of these adventures. As many of you already know, Watchmasters is asked on occasion to locate, supply or consult regarding timepieces in television and films in Hollywood. This is always a privilege, great fun and makes for some very interesting adventures! Hearing from and working with all of our many friends at Paramount Studios is simply incredible. They make the adventures possible. Here is our humble tale of working with Mr. Spielberg and Mr. Cruise on the set of War of the Worlds!!

The phone here in the office rang one evening about 8 P.M. It was Mr. Spielberg’s office at Paramount Studios. He was in a meeting with his Propmaster, Mr. Harlocker, and others trying to figure out how they could find a particular vintage watch. They described the watch to me, a vintage 1949 Omega Chronograph and the required specifications. I knew this would be a hard one to find. The watch was the somewhat rare Omega 321 and needed to be in original mint condition and would be worn by Mr. Cruise in the film. This watch was shown in the original War of the Worlds and was intended to be a connection to the earlier film of the 1950’s.

I located the watch in a private collection in Australia, brought it in and immediately got it to Mr. Spielberg. Fortunately, it was exactly what he wanted! As is often the case, I was invited to come spend some time on the movie set which is always an exceptional thrill for me. I simply can not describe what it feels like to be on location, standing on the set between Mr. Spielberg and Mr. Cruise and immediately behind the great Panavision camera watching these two, clearly genius gentlemen, apply their skills to a scene. The Producers, Ms. Kennedy and Mr. Wilson were exceptionally kind to me and on occasion I hear from them while they are filming in some part of the World.

The Crew is equally amazing! To take a Production on location is like planning the D-Day invasion! The Production is a completely self-contained city totally independent of the area. They bring all of their food, water, electricity, medical, beds everything! They must locate food, wardrobe, accommodations, sets etc. for hundreds of people over thousands of miles and yet they are so good at what they do they make what seems impossible..come together seamlessly. Thank you Mr. Strauss, my friend.

I had a fantastic time working with and visiting everyone on War of the Worlds. I would like to thank Propmaster Harlocker for the opportunity as well as all of my friends at Paramount.

I hope you all have enjoyed the story. By the way, you can see this watch in about the first 1/3 of the film it is shown in a close-up on Mr. Cruise’s wrist! 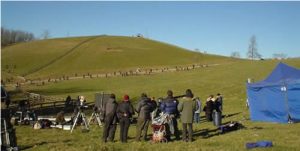